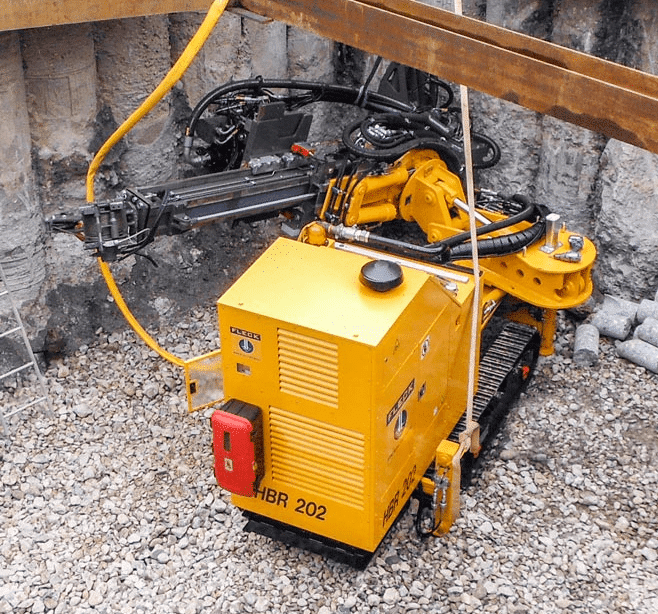 What happens when a Dubai hotel undergoes structural movement leading to water penetration in the basement?
In this case, Casagrande undertakes micropiling in the of 2,456.3 m2 and 1832.2 m2 when excluding the piling caps area.
A hotel in Dubai, UAE. which was built in 2007 and consists of eight stories and two basements, was undergoing some structural movement in the basement levels, leading to cracked columns, walls and slabs. In turn, that had resulted in water penetrating through cracks in the basement’s slab and walls since 2017. There was also the additional problem of the hotel suffering differential settlment.

A solution based on underpinning using micropiles was designed with tube manchette grouting to enhance the strength and stiffness Of the underlying soils and reduce permeability.
All the drilling and injection works was executed from the second basement which had restricted headroom; just 2.5m. Both the confined space on site and the health and safety concerns regarding the fumes forced the contractor to use all-electric machinery, including the low-headroom electric drill rig from Hütte Bohrtechnik — the Hütte HER 202 E. The compact machine features a telescopic mast that can extend up to 2.7m high with a poværful rotary Of 2.8tm torque. Drilling Of all 312 micropiles and the 582 tube manchette pipes was done using just the one machine working in double shifts.

The real benefit of the preventer system, however, was that it allowed the installation and grouting Of the micropiles in a restricted working area — without the need for temporary dewatering. It has been estimated that
there was a f350,OOO saving on this project thanks to the use Of the preventer system rather than conventional dewatering.
Due to limited space and health and safety concerns, an all-electric Hütte Bohrtechnik rig was used in the basement of a Dubai hotel suffering from structural movement

Close Menu
Manage Cookie Consent
To provide the best experiences, we use technologies like cookies to store and/or access device information. Consenting to these technologies will allow us to process data such as browsing behavior or unique IDs on this site. Not consenting or withdrawing consent, may adversely affect certain features and functions.
Optionen verwalten Dienste verwalten Anbieter verwalten Lese mehr über diese Zwecke
View preferences
{title} {title} {title}