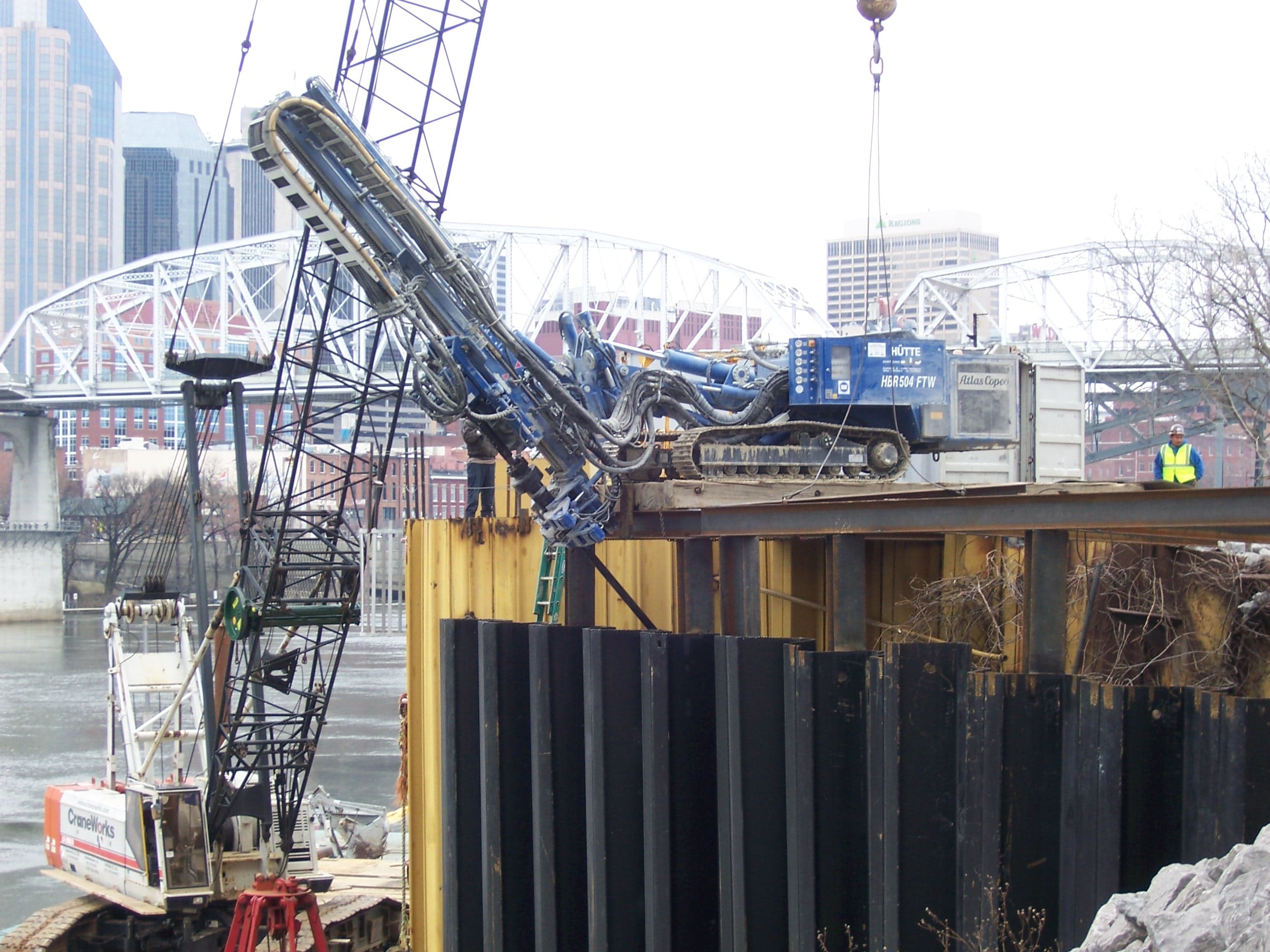 “From its perch atop a 20-foot long platform spanning the gap between new and old sheet piling on the banks of the Cumberland river, it sits ready to drill the first of three 105-foot anchors. It was the only drill in its size with the power GeoFirma needed for the job—as well as the only drill GeoFirma found that could drill at a 45-degree angle back under itself.”

Matching equipment to the job GeoFirma owner Eric Snyder found a way to avoid the substantial time and cost that would have been invested in building a platform in the river itself to drill from. If he could locate a compact yet powerful crawler drill rig, he could drive it onto a temporary deck that would bridge the gap between the old and new piling. Sales rep Stacy Lynn of the Atlas Copco‒Nashville store matched up Snyder with a Hütte HBR 504 hydraulic crawler drill and a 7 ⅝-inch Atlas Copco Symmetrix simultaneous drilling/casing advancement system with Secoroc QL 60 down-the-hole hammer. An Atlas Copco XVRS 1000 portable compressor fed air to the hammer at 1,000 cfm and 180 psi.

Snyder said: “The Hütte 504 was the only drill its size with the power we needed, and it was the only drill we could find that could drill at this great an angle under its own tracks. We wanted to work from a bridge between the old sheet piles and the new. If we had tried to mount a drill to an excavator, we would easily be over 50,000 pounds. We’d have had to build a platform in the river to work from. The cost on that would have been exorbitant.” The Hütte’s maximum weight is just under 25,000 pounds. Though only 6 feet 10 inches wide and 20 feet long configured with mast down for tramming, the rig has 8,500 pounds of crowding force, 13,900 pounds of extraction force, and more than 4,200 foot-pounds of torque. 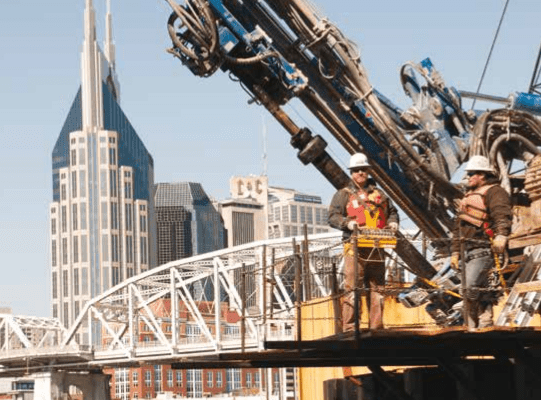 Hütte Bohrtechnik is a global leader supplier of foundation equipment.
The Hütte expertise in manufacturing drilling equipment provides answer to all contractor’s need in jobs such as micropiles, anchors, geothermal applications and jet grouting.

Close Menu
Manage Cookie Consent
To provide the best experiences, we use technologies like cookies to store and/or access device information. Consenting to these technologies will allow us to process data such as browsing behavior or unique IDs on this site. Not consenting or withdrawing consent, may adversely affect certain features and functions.
Manage options Manage services Manage vendors Read more about these purposes
View preferences
{title} {title} {title}